Google+ In Memory of Yanni 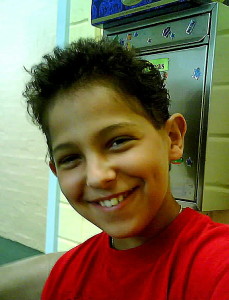 Yanni was a very special boy. He loved movies, practical jokes – the grosser the better. He enjoyed impersonating actors; Jim Carrey, Mike Myers & Eddie Murphy were his favourites. He loved playing trivia Boardgames with his Grandmother and Carers, soccer, ten pin bowling, going to the cinemas and joking with his sister Eleyna, watching WWE WrestleMania, Playing Dragon Ball Z on his Playstation, playing golf with his father, fishing with his grandfather, photography, BBQ’s, and mucking around with his friends and pet dogs as well as spending quality time with his aunts, uncles and cousins.

Yanni was diagnosed with a rare neurological degenerative disease known as Adrenoleukodystrophy three days before his tenth birthday. Renee, her husband, and their respective families will never forget that day.

Renee and Yanni were seated on a bench in front of the Brisbane Mater Hospital waiting for George, her husband, to bring the car around from the parking garage when Yanni asked her ‘If he was going to die?’ she looked into his eyes and knew everything had changed the moment those six words left her son’s mouth, gone was his innocence. Their lives would never be the same again, especially her sons. The sadness and fear were etched in his young, upturned face, the tears welling in his eyes. She told her son that he wasn’t going to die, that he was going to fight and prove the doctors wrong, what could she say, she didn’t believe for a minute her son would die.

Yanni underwent a bone marrow transplant in the hopes of stopping the progression of the disease, his younger sister happened to be a bone marrow match without the recessive gene which is usually passed from mother to daughter, a miracle in itself. As far as transplants go, it was a success but failed to stop the progression of the disease. Sadly, Yanni lost his fight against ALD one month before his fourteenth birthday. He was a courageous young man, with the wisdom of one far older than his years. In those last four years of his life, he laughed and lived more than he ever had in the first ten years of his life.

Renee asked him one night, six months after his transplant, whether he was angry about everything that had happened to him? His answer; ‘No mum, I’ve gotten past it,’ another example of his insightful wisdom was, ‘Don’t worry mum we’ll get through this.’ He said this after having six teeth surgically removed before having his Bone marrow transplant. On many occasions, he would surprise his family with small gems of wisdom that still inspire them to this day.